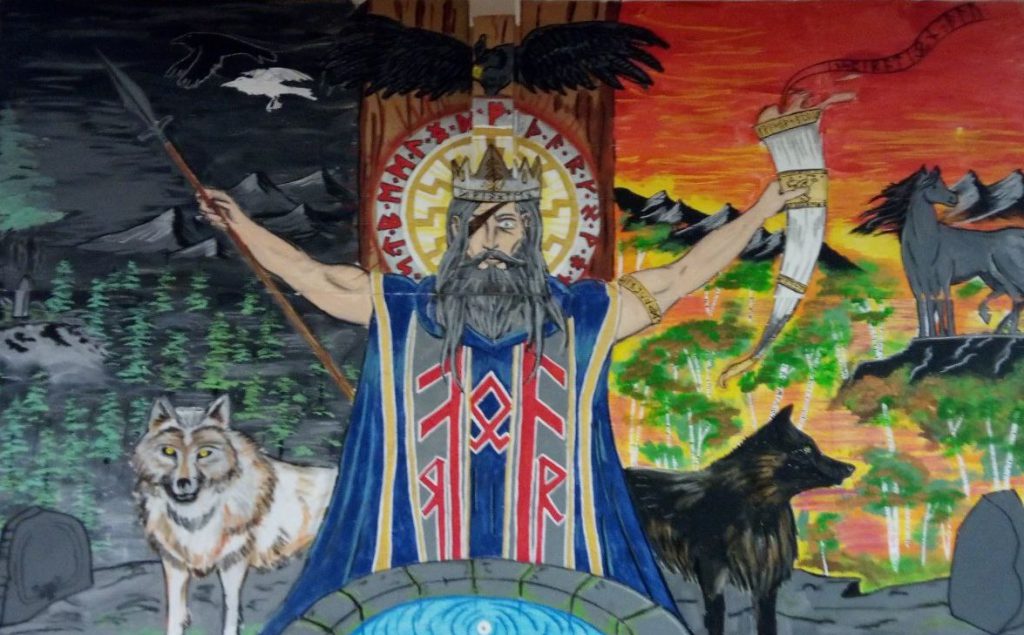 “Then said Gangleri: “Who are the Æsir, they in whom it behooves men to believe?” Hárr answered: “The divine Æsir are twelve.” …Then said Thridi: “Odin is highest and eldest of the Æsir: he rules all things, and mighty as are the other gods, they all serve him as children obey a father… Odin is called Allfather because he is father of all the gods. He is also called Father of the Slain, because all those that fall in battle are the sons of his adopt on; for them he appoints Valhall and Vingólf, and they are then called Champions. He is also called God of the Hanged, God of Gods, God of Cargoes; and he has also been named in many more ways, after he had come to King Geirrödr:

Then said Gangleri: “Exceeding many names have ye given him; and, by my faith, it must indeed be a goodly wit that knows all the lore and the examples of what chances have brought about each of these names.” Then Hárr made answer: “It is truly a vast sum of knowledge to gather together and set forth fittingly. But it is briefest to tell thee that most of his names have been given him by reason of this chance: there being so many branches of tongues in the world, all peoples believed that it was needful for them to turn his name into their own tongue, by which they might the better invoke him and entreat him on their own behalf.”
– Gylfaginning

Allfather Óðinn is the God that spoke to the heart of our Founder, Stephen McNallen, so long ago and awakened the faith we call Asatru.  Óðinn is the God who placed his hand upon the shoulder of Alsherjargothi Flavel when leadership was passed into his keeping.  Óðinn has blessed the Asatru Folk Assembly throughout the decades and had inspired us, always, towards greater achievements and greater blessings.  The Allfather is the font of inspiration and the God of will.  Through Inspiration, Will, and Sacrality, Óðinn and his brothers Vili and Vé shaped our reality and, literally, shaped us as a Folk.  With his one eye, Óðinn watches over his sons and daughters, he watches over us and takes pride in our victories.

We look to Óðinn for wisdom, for inspiration, and we seek to grow more like him as we evolve.  In 2015, we honored Óðinn with the first hof to our Gods in a thousand years, and the first hof in North America, Óðinshof in Brownsville California.